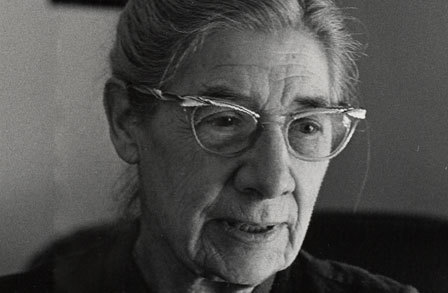 From “Cold Hills”
*
I have lived so long
On the cold hills alone …
I loved the rock
And the lean pine trees,
Hated the life in the turfy meadow,
Hated the heavy, sensuous bees.
I have lived so long
Under the high monotony of starry skies,
I am so cased about
With the clean wind and the cold nights,
People will not let me in
To their warm gardens
Full of bees.
*
About This Poem
Known mostly as a writer of historical novels, Janet Loxley Lewis began her career as a poet. These early poems concentrate on strong, vivid imagery and are often praised for their rhythmic lyricism.
*

and the University of California at Berkeley. Lewis died in 1998, at the age of ninety-nine.