Baudelaire in Airports / by Amy King 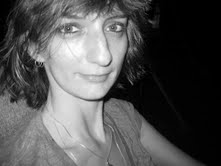 Will my arm be enough to reach you?

On whose side is indecision?
You are the mother of material travel,
even in the form of a shoeless child.
It is difficult to place time–especially here.
You aren’t now, and you don’t come here.
The other sameness, an other of the same
in the window before take off.
So she learned past such things the echo.
With the same eye from windows one watches
a person with umbrella, sleek and pointed,
seek sky from its wet roof. As if the bitter low
would be a woman with whiskers,
her eyes desperate, street-view, alone.
How does this view of everything arc the moon?
If a mosquito lands, what happens to the one who flew?
She gives over to the site of red,
another selfless pooling. A hungry pond.
The painting of the person also wears mobile eggs,
and the woman returns to wheat fields
to drink goat’s milk for her meal and bath.
That the body harbors more than combination,
that we are more than alchemy’s process,
that they are agents and actors incognito,
is visible only to those strolling on avenues on lost
streets Parisian, no longer able to be found.
*
About this Poem:
“Baudelaire lingered in airports where he practiced his poet eye, rendering the everyday exotic, romantic, stark or layered. Like Blake’s grain of sand, he saw the world in a hub–until he died, paralyzed, in his mother’s arms. The distance between us is a swan song.”

Amy King is the author of several books of poetry including, I Want to Make You Safe (Litmus Press, 2011). She co-edits the literary magazine Esque and teaches
at SUNY Nassau in Garden City,
New York.