My Childhood / by Matthew Zapruder 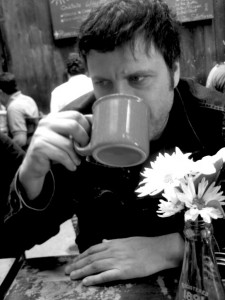 the orange ball arcs perfectly into the orange hoop

you will never get to hold that

I am here and nothing terrible will ever happen

across the street the giant white house full of kids

turns the pages of an endless book

the mother comes home and finds the child animal sleeping

I left my notebook beside the bed

the father came home and sat and quietly talked

one square of light on the wall waiting patiently

I will learn my multiplication tables

“Often I’ll start poems by handwriting in a notebook, just mostly illegible nonsense, proto-notes, trying to latch on to one single ‘fine isolated verisimilitude caught from the Penetralium of mystery’ (Keats) that I can move forward with. In this case I wrote down some lines, in a kind of distracted trance, and when I went back to them later, was quite surprised to realize they were a complete finished poem. That’s only happened once or twice to me, so when I have that impression, I take it seriously, though it bothers my petit-bourgeois sense that something is only worthwhile if it has been ‘worked on.’ The title immediately came to me, I felt self-conscious about it, because it has a bit of a grandiose or summative quality, but it also seemed like the right balance between driftiness in the body of the poem and explicitness in the title. I guess I knew what I was writing about without knowing it, and the title just says it. The title plus poem felt personally inevitable, and out of my hands.”