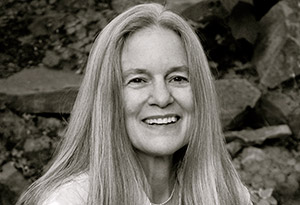 And suddenly, it’s today, it’s this morning
they are putting Ruth into the earth,
her breasts going down, under the hill,
like the moon and sun going down together.
O I know, it’s not Ruth–what was Ruth
went out, slowly, but this was her form,
beautiful and powerful
as the old, gorgeous goddesses who were
terrible, too, not telling a lie

for anyone–and she’d been left here so long, among
mortals, by her mate–who could not,
one hour, bear to go on being human.
And I’ve gone a little crazy myself
with her going, which seems to go against logic,
the way she has always been there, with her wonder, and her
generousness, her breasts like two
voluptuous external hearts.
I am so glad she kept them, all
her life, and she got to be buried in them–
she 96, and they
maybe 82, each, which is
164 years
of pleasure and longing.  And think of all
the poets who have suckled at her riskiness, her
risque, her body politic, her
outlaw grace!  What she came into this world with,
with a mew and cry, she gave us.  In her red
sweater and her red hair and her raw
melodious Virginia crackle,
she emptied herself fully out
into her songs and our song-making,
we would not have made our songs without her.

O dear one, what is this?  You are not a child,
though you dwindled, you have not retraced your path,
but continued to move straight forward to where
we will follow you, radiant mother.  Red Rover, cross over.

“When Ruth Stone, one of our great American poets, died, I was not able to get to Vermont for her burial. That morning, I sat by the window, over Riverside Drive, in New York City, and let my mind go, took off its collar and leash, and let it run–straight to her. All I asked of my mind was that it report back to me what it saw, what it thought and felt. After the poem was finished (by hand, by ballpoint in grocery-store notebook), and typed, and revised a little, it was ready to go out and seek other lovers of Ruth Stone’s poems, with whom to observe and mourn her passing, and to praise her. Later I had the sorrowing joy of reading Toi Derricotte’s story of her deep friendship with Ruth and her family, and of the day of the burial in her essay ‘Ruth Stone’s Funeral’ which was published inWater-Stone Review, Volume 15, 2012. Thus do we all keep each other company.”

*
Sharon Olds is the author of numerous books of poems, includingStag’s Leap (Knopf, 2012), which received the Pulitzer Prize. She is a Chancellor Emeritus of the Academy of American Poets and teaches in the Graduate Creative Writing Program at New York University.