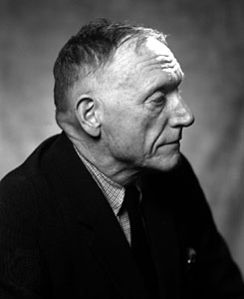 I shall build me a house where the larkspur blooms
In a narrow glade in an alder wood,
Where the sunset shadows make violet glooms,
And a whip-poor-will calls in eerie mood.

I shall lie on a bed of river sedge,
And listen to the glassy dark,
With a guttered light on my window ledge,
While an owl stares in at me white and stark.
I shall burn my house with the rising dawn,
And leave but the ashes and smoke behind,
And again give the glade to the owl and the fawn,
When the grey wood smoke drifts away with the wind.
*
About This Poem
Robert Penn Warren entered Vanderbilt University in 1921, where he became the youngest member of the group of Southern poets called the Fugitives. Warren’s first poems were published in The Fugitive, a magazine which the group published from 1922 to 1925. The Fugitives were advocates of the rural Southern agrarian tradition and based their poetry and critical perspective on classical aesthetic ideals.
*
Robert Penn Warren was born in Kentucky in 1905. Though regarded as one of the best poets of his generation, Warren was better known as a novelist and received tremendous recognition for All the King’s Men, which won the Pulitzer Prize for Fiction in 1947. His Promises: Poems, 1954-1956 won the National Book Award and the Pulitzer Prize. In 1979, he earned a third Pulitzer Prize for Now and Then: Poems, 1976-1978. Warren served as a Chancellor of the Academy of American Poets from 1972 until 1988. In 1986, Warren was named the first U.S. Poet Laureate Consultant in Poetry. He died on September 15, 1989.

One thought on “Vision / by Robert Penn Warren”